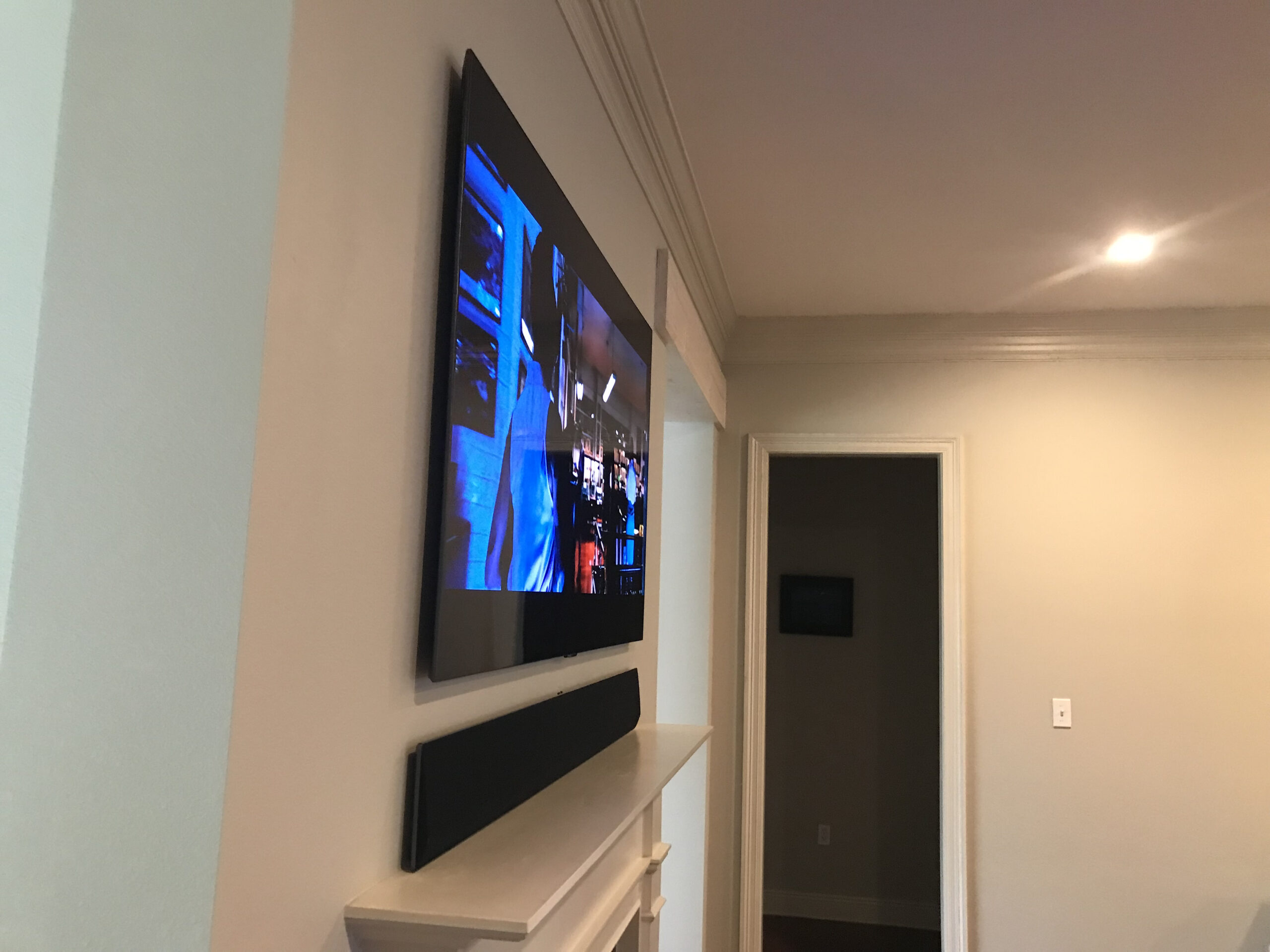 About 2 weeks ago I had Tony wall mount, and install an electrical outlet to hide the wires behind a 50″ tv in my bedroom to give it a clean flushed look. I called around mid day and was able to get a same day appointment later that evening at 5 pm. When he finished his appointment schedule prior to mine he called and asked if it was ok for him to come earlier to begin on my project and he arrived a hour early. After explaining to Tony what i wanted he put me at ease with his knowledge of the job. It was clear during the process that he is professional, knowledgeable and thorough on the job. I am pleased with his work and plan on calling him back to wall mount two more tv’s and work on my surveillance system. I would definitely recommend him to install or mount your tv, audio, and/or surveillance system.

Google Rating
5.0
Based on 16 reviews

The Installation Experts
4.9
Based on 48 reviews
review us on

spencer albers
These guys were great they were extremely efficient, clean. All 3 TVs look great

Dee T
Very Professional and fast. His work speaks for itself.

G.R. Joe
Best service I ever had from any company!!! Fast, knowledgeable, courteous, and kind! Definitely... recommend!!!!read more

Eric Storm
Did good job putting the projector and screen up but could of hired a cheaper handy man for that i... thought i was hiring a professional but i was wrong. Geek squad could of done with this guy done won't be coming back. The price we agree on was 250 then he jumps the price almost to 300 so couldn't recommend him for other then being over price.He didn't aligned the projector at all with the screen saying you can't get a perfect square when you can others have done it so not sure if he knows much about projectors.Guy didn't know how to square the image or anything i would not shop with them i could of paid a kid 50 bucks to hang it the way this guy did.read more

Tiffani Black
Tony is the best in the business. He is prompt, communicative, and knowledgeable. A consummate... professional!read more

NOLA GOON3
WHAT CAN I SAY !!! These Gentlemen are heaven sent. I put in my appointment request and received a... confirmation call immediately. All questions were answered professionally. When they so no wires it’s absolutely “no wires”. The Installation Experts is the way to go. Best in the business hands down, money well spent!!!read more

Bret Peterson
Tony did an outstanding job. I would highly recommend him and his company to anyone looking to... install big screen TV’s. He was very accommodating and was able to fit me in on the same day I called. Very professional and knowledgeable!read more

Michelle Michaelis
Tony was great. He accomondated our busy schedule to find a time what worked for us. Install took... less than an hour. Very professional. Wants to make the customer happy. Will use again in the future.read more

Arthur Sauls
Very professional, courteous and fast. Couldn’t be happier with the installation and the outcome.... Definitely recommended for any of your needs. Tony and Joseph are friendly and make sure your happy prior to leaving. Great quality and extremely nice!read more

Lisa Hebert
Mr. Tony installed my Tv but he went above and beyond customer service. I had been looking for... someone for weeks with then storm Ida came I called him yesterday and he came out Saturday. And hung some other things that I asked for . So thankful for Mr . Tony !! Highly recommended him !!!Thank you Mr. Tony.read more

Igs Spencer
Awesome, my husband contacted The Installation Experts, great Communication, quick service and very... friendly and professional, did an amazing job. I highly recommend and will be using him again!read more

Chad Culbertson
Tony and Joe did an excellent job installing three TVs in our home. They were cordial,... professional, and provided excellent suggestions on the best locations to mount the TVs and sound bar. I would absolutely contact them again if I need assistance with any more installations.read more

Amanda Bergeron
Tony was superb! So patient and a perfectionist. His attention to detail, expertise and... professionalism is top notch. Could not recommend him more! When we get our new outdoor living area built, we’ll be calling Tony again to setup our outdoor tv. Thank you SO much Tony!!read more

Dee B.
Tony came out and installed my two TVs the next day, was punctual, very professional and did a... great job! Now I can enjoy my TV and peace.read more

Rashadd Phillips
Awesome service! Got two tv’s mounted and the work was exceptional. Very professional and very... responsive. I would definitely recommend to anyone looking to get their tv’s mounted.read more

alexis mcnair
Great time management and manners. He made the process a breeze!!!!

buzdoc
Our installer B. Tony Glapion was spot on and very professional. I am very happy with the whole... process and workmanship. We will be calling them out again to our home for more work. Thank you so much!read more

Diana McIntyre
Tony installed 3 tv’s with sound bars and a whole house antenna. We couldn’t be happier! His... attention to detail and knowledge Of which products worked best for our home made the process smooth and hassle free. Do yourself a favor and trust this professional to get the job done right the first time.read more

Cathy Cashman
Tony did an amazing job installing our televisions and making everything look attractive. We are... looking forward to him doing other things we did not know were even possible.read more

Joseph D'Addezio
Tony is a great person that does great work. We have worked with him twice. Once for a fairly... standard tv installation and another for a pretty custom router installation. Both turned out amazing. Please check out The Installation Experts any time you need quality work done around the house.read more

Jon Helms
Scheduled online and he showed up a bit early after calling ahead to make sure that was ok. Once... here he took a look at the site inside & out, presented me a few options to be sure I would not be surprised at how the install would be done and he did the work quickly, efficiently, and safely. Would recommend and hire again if I have a need.read more

Grant Freeman
I called Tony at about 9am on a Friday to install 2 TV mounts. One on a brick wall and another on a... complex mantle mount system above the fireplace. By 1:30pm the same day, he had installed both for a fair price. Do not miss this guy, he is the real deal.read more

Justin Jones
It had been my lifelong dream to construct a Home Theater and I called on Tony at The Installation... Experts to get the job done.Right from the start, Tony was very accommodating to my schedule and always available to answer questions and give expert advice. Tony is very professional and is workmanship is top notch. I was very pleased with the final results and I will seek his expertise in the future should I need to complete another project.read more

Jay Coba
Had a great experience. Timely responses to emails and scheduling was hassle free. Quick... installation and end result looks awesome. Had an answer for all my needs and it ended up better than I expected.read more

Amanda Ma
Called and they came out within the hour on a Saturday. Took no time at all to get it done. Our TV... looks great, and not having to look at ugly wires is a huge plus! Can't recommend them enough!read more

michelle wright
came out to initially mount one tv and loved his work so we got all home tvs mounted and wires... hidden. the work was very neat and professional, also bringing extra equipment needed!! will be using the installation experts for all services including camera installation.read more

Bernard Glapion III
Great businessman and father. For +20 years he’s had exceptional experience in setting up digital... equipment for customer satisfaction. From the early 90’s of giving sales and customer service for security systems, early flip phones, and even beepers, his versatility to evolve with the industry has kept people up to date with the growing culture. He’s been a great reference for both old and modern questions, and now I’m ready to set up my life and “go digital.”read more

Kelly Lewis
Tony came on the same day I called and did a fantastic job! Very professional and explained all of... the options to me. Great service!read more

Joseph Johnson
Very professional service and explains everything in details 👍🏾

Chris Narcisse
Tony came on short notice to mount 2 TV’s and while on the job suggested and provided a solution... for the unsightly wires. Very knowledgeable and professional.read more

Tommie Powell
About 2 weeks ago I had Tony wall mount, and install an electrical outlet to hide the wires behind... a 50" tv in my bedroom to give it a clean flushed look. I called around mid day and was able to get a same day appointment later that evening at 5 pm. When he finished his appointment schedule prior to mine he called and asked if it was ok for him to come earlier to begin on my project and he arrived a hour early. After explaining to Tony what i wanted he put me at ease with his knowledge of the job. It was clear during the process that he is professional, knowledgeable and thorough on the job. I am pleased with his work and plan on calling him back to wall mount two more tv's and work on my surveillance system. I would definitely recommend him to install or mount your tv, audio, and/or surveillance system.read more

Gizzelle Bozonier
The things I liked about Mr. Glapion is that he was very professional. He came in did his work,... cleaned up and explained his process. Very professional. I will use him in the future and be sure to refer him out to my family and friends.. Great experience!read more